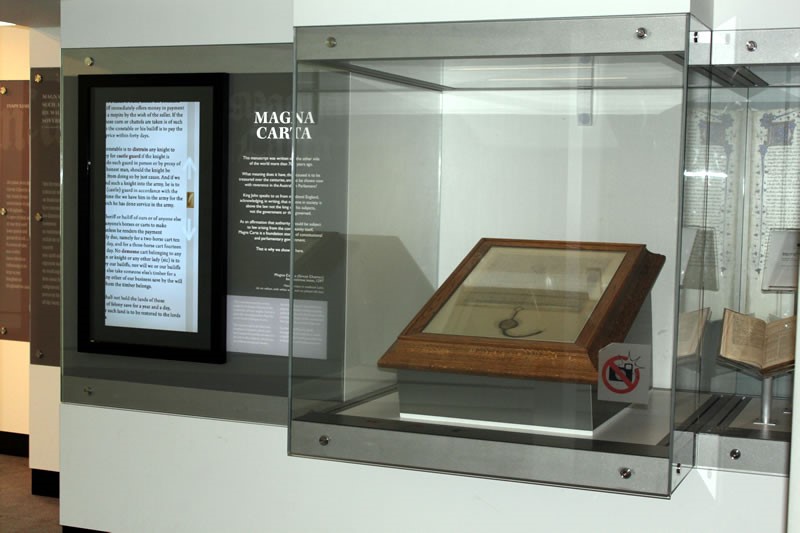 The Magna Carta (Great Charter) was agreed to by King John of England at Runnymede by the River Thames in 1215 under pressure from rebellious barons, landowners who provided him with soldiers. The barons were unhappy with the high taxes he had imposed for an unsuccessful war in France and with the way he abused his position as lord of their lands. The Charter was annulled soon after by Pope Innocent III to whom King John was subservient but revived during the reign of his son King Henry III.

King John didn’t actually sign the document. Instead he showed his agreement by placing his seal upon it. The Magna Carta is important because it provided a foundation stone for the rule of law and gave us a basic right to justice. It stated:

No free man shall be taken, imprisoned, outlawed, banished, or in any way destroyed, nor will We proceed against or prosecute him, except by the lawful judgement of his equals and by the law of the land.

Winston Churchill (British Prime Minister, 1940-45 and 1951-55) described the Magna Carta as “the foundation of principles and systems of government of which neither King John nor his nobles dreamed”.

There are several different versions of the Magna Carta, issued at different times. The version of 1297 was accepted by King Edward I and declared to be part of the law of England. Some parts of it are still in force today, including in several Australian States and Territories. A rare copy of it is held in Parliament House in Canberra,