Born in Rome in 1920, Romaldo (Aldo) Giurgola AO was an Italian academic architect, professor and author. After serving in the Italian armed forces during World War II, he studied at the Sapienza University of Rome. Mr Giurgola then completed the equivalent of a B.Arch. with honours in 1949 and then a master’s degree in architecture from Columbia University, United States.

Instead of accepting a request to join the panel of judges for the 1980 international competition for the landmark Australian Parliament House in Canberra, Mr Giurgola opted to become an entrant. He went onto win that competition and moved to Australia. As senior partner of Mitchell/Giurgola & Thorp Architects, he was the principal design architect for Australia’s Parliament House from its inception in 1980 until 1999.

Mr Giurgola was a proud Australian, making Canberra his home and becoming a citizen in 2000. In 2010 his contribution to the federal capital was commemorated by his inclusion in the Australian Capital Territory’s Honour Walk. Mr Giurgola died peacefully in Canberra on 16 May 2016.

Mr Giurgola received numerous awards throughout his career including: 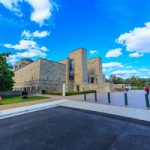